Emily tagged me in this tag…back in June, I think it was? Shocker that I’m just now completing it, right? Thanks for the tag, Emmy! <3

Name a cartoon that you love.

Avatar: The Last Airbender is definitely one of my favorites. I watched it back when it first aired on Nickelodeon and instantly fell in love. I would never get tired of watching this series. I enjoyed the sequel series, The Legend of Korra, but not nearly as much as the original.

What is your favorite song right now?

It’s a bit of a tie right now. I just recently heard one of Skillet’s newer songs that was released with their album, Unleashed, last fall. That song would be The Resistance. I’ve also been repeatedly listening to Black Rose by Volbeat. Here’s a video of both if you’re interested. I’ve been listening to a lot of Panic! At The Disco as well and one of my friends recently got me into Mystery Skulls.

What could you do for hours that isn’t reading?

Go hiking. Go camping. Pet my dogs. Cook (I’ve been trying to more recently since I’ll be moving out in the near future). Binge watch TV shows. Play video games.

What is something you love to do that your followers would be surprised by?

Ughhh, I feel that my followers wouldn’t be surprised by much (is that a good or bad thing…? Heh…). I don’t do anything all that surprising, really. I’m a pretty non-surprising person. #letsmoveon

What is your favorite unnecessarily specific thing to learn about?

Different ways to make Crab Rangoons. I am obsessed with them. I could eat twenty and not feel a drop of regret. There’s a surprising number of ways to make them, including turning it into a dip. Now I want some…*drool*

What is something unusual that you know how to do?

I can’t really think of anything to put here. I feel like nothing is ‘unusual’ anymore, because a lot of people can do a lot of things. I used to be able to do a fairly decent Scottish accent, but I haven’t done it in years and it’s probably not any good anymore.

Name something you made in the last year and show us if you can.

Well, I’m not super crafty or anything, but I made these center pieces for my friend’s bridal shower and I was rather pleased with how they turned out. They’re on the simple side, but it was a pain in the butt to get that black sparkly ribbon to stay put. 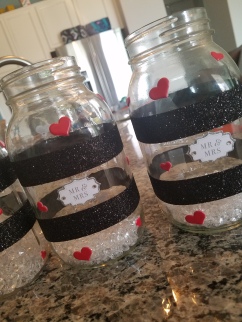 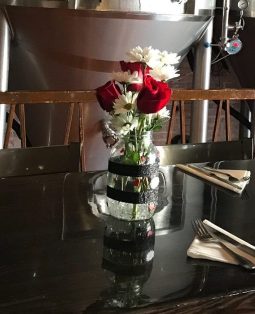 What is your most recent personal project?

Well, I tried participating in NaNoWriMo this year and it went about as well as I thought it would, with me being in school and working. Plus helping out with my friend’s wedding. I think I got a whopping 200 something words written. Oh well, I’ll try again some other time. I’ll still be in school next fall, but maybe it’ll happen if I prepare better. We’ll see. I have a lot of story ideas, it just takes a lot of concentration for me to actually sit down and write them out.

Tell us something that you think about often.

Hmm, I’d have to say recently I’ve been thinking a lot about moving out. I plan on renting a house with some friends and we’re going to start looking in the next month or two. I’m nervous yet super excited at the same time. Adulting sucks, but you gotta do it sometime. It’s also made me think a lot about everything my parents have done for me all these years (cue cheesy ‘awww’).

But seriously. I have some friends that are not in the best family situations and, given every family has its problems, including mine, I’ve still been extremely well off during my time at home. It’ll definitely be weird not being able to run into the other room to tell my mom something real quick. I’ve also been asking my dad to show me how to do a lot of things recently. Like how to change my car battery, put up the Christmas tree, build a fire pit we recently got. I love learning how to do things myself (for the most part). So I’ve been bugging him to show me how to do everything recently. Sure, there’s YouTube, but I think my dad really enjoys showing me this stuff too.

I think the strangest thing will be not having my dogs around. It feels weird having them gone for the whole day when they get groomed, it’s going to be tragic when I don’t see them running to the front door every day when I get home. Or just being able to pet them whenever I feel like it. I do eventually want to adopt a dog, but I’m planning on waiting until I’m done with school and more settled into a career. Since it’s like having a child. And I want many furry children in the future.

…I didn’t mean for this section to get all mushy and personal! xD

Give us something that is your favorite, but make it oddly specific.

The honey mustard sauce from Dairy Queen. Honey mustard is my favorite condiment in the universe – which is weird because I’m not really a fan of mustard or honey – but mixed together…yuuuum. Pure bliss.

Say the first thing that pops into your head.

I should be doing homework right now…

I’m lazy and will not be tagging anyone, but feel free to participate! And if you do, make sure you let me know so that I can read your responses! :D