My dear Emily tagged me in another fun-looking book tag! Who doesn’t love this movie? Or at least find it entertaining…? In her post Emmy states that it is ‘one of the most quotable movies of all time’ and she is absolutely right. If you’ve never seen this movie go watch it.

1. It’s Pronounced Like “Cady”. – Which fictional characters’ names did you get completely wrong?

I can’t really think of any off the top of my head, but while reading the Demonata series by Darren Shan, there was a character with the name of Beranabus. It’s not so much as me mispronouncing his name…it’s more I was really just too lazy to sound it out correctly…xD In my head whenever I read his name it just came out as ‘Bernabus’ so basically I just didn’t bother to pronounce the first ‘a’. Shame on me, I know.

I think it would be interesting to place the Bauldelaire siblings from the A Series of Unfortunate Events books, in the world of the Gone series by Michael Grant. If you’re not familiar with the Gone series, it takes place in modern California but in a small section of the state everyone over the age of sixteen vanishes, no technology works, and some kids begin showing signs of special powers. Since the Bauldelaires are so practical and smart, I think it would be an interesting crossover.

3. On Wednesdays, We Wear Pink. – Repetition, repetition. Which book gave you déja vu of another book while reading it?

The Escape From Furnace series by Alexander Gordon Smith reminded me of the Demonata series by Darren Shan (mentioned earlier). They are both horror-based and the writing style is vaguely similar. Also, both main characters are the type that completely freaked out, but then learned to roll with it as shit hit the fan.

Honestly, I can’t really think of anything specific at the moment. I know I’ve read some books where the main female character was whiny and had to have a ‘big strong man’ come rescue her, but usually at some point she has a ‘revelation’ and becomes more sure of herself.

5. You Go Glen Coco! – Name a character you felt like you wanted to cheer on whilst reading.

The Baudelaire siblings from the A Series of Unfortunate Events books by Lemony Snicket. So many bad things happen to these kids, but they always manage to pull through it somehow. You just can’t help but want to be their personal cheerleader.

6. Get in Loser, We’re Going Shopping! – How long do you typically spend at a book shop?

If I’m not looking for anything in particular and am just browsing I usually stay longer than if I were actually looking for a specific book. I use my public library a lot so I try to only buy books that are on my list and that aren’t at the library. There are only a few series where I will actually purchase the books even if they are at the library.

7. It’s Not My Fault You’re Like In Love With Me Or Something! – Which character would have to get out a restraining order on you, if they were real?

I’d like to think no one would ever put a restraining order on me…but if it really came down to it, probably Harry Dresden from the Dresden Files series by Jim Butcher. I luff him.

8. I Can’t Help It That I’m Popular. – Which over-hyped book were you cautious about reading?

Red Queen by Victoria Aveyard. I still haven’t read this book, but I’ve heard mostly good things, but some not-so-good things too. I’m definitely going to read it…eventually, but I’m a bit cautious that people have hyped it up so much that I’ll end up being disappointed. I guess we’ll see, when I finally get around it it! xD

9. She’s A Life Ruiner. She Ruins Peoples’ Lives. – We all love Regina George. Name a villain you just love to hate.

Hmmm, I’m going to stray away from books and into anime for this answer. I choose Hisoka from the anime, Hunter x Hunter. He’s an extremely sadistic villain that dresses as a jester and uses playing cards as weapons. He’s actually quite creepy, but I can’t help but love him! <3

10. I’m Not Like A Regular Mom, I’m A Cool Mom. – Your favourite fictional parents.

11. That Is So Fetch! – Which book or series would you love to catch on?

I can’t really think of one, honestly. I like a lot of different books, but I feel the ones I really enjoy are already fairly well-known. I can always fall back on one of my absolute favorites, The Dresden Files by Jim Butcher, but even that has it’s own group of followers.

12. How Do I Even Begin To Explain Regina George? – Describe your ideal character to read about.

I admit I do love the sarcastic characters that always have a great come-back for everything. And an awesome sense of humor. Humor is a big turn on for me when it comes to liking characters. If there isn’t at least one funny character…the entire story just feels blah. The characters I lean toward liking are usually on the stubborn side as well. I can’t really think of anything else at the moment…so those few traits will have to do!

It depends where I am. If I’m at home I usual start tearing up pretty bad. I’m also allowed to read at one of my jobs, so when I’m reading a more emotional part of the book I try my best to resist tearing up…but sometimes it just doesn’t work…^^;

14. Nice Wig Janice, What’s It Made Of? – Your Mom’s Chest Hair! – Which character’s one liners would you love to claim for your own?

Harry Dresden from the Dresden Files by Jim Butcher. I use him as an example waaaay too much, but he’s amazing so it’s okay.

15. Boo, You Whore. – Name a time a characters decision has made you roll your eyes.

Pretty much most of Kitty’s decisions in Kitty and the Midnight Hour by Carrie Vaughn, the first book in the Kitty Norville series. Her character was just…ugh, in the first book. But I wanted to see where the author took things, and now I’m about to start the eleventh book in the series. So obviously I think it took a turn for the better.

And done! Even though Emily tagged me…over three months ago, I’m proud of myself for finally finishing it. Especially because it had sat in my post section as a draft for quite some time. I have quite a few more tags to get done so I’ll be trying my best to catch up on everything. As usual, I tag anyone who was interested in this tag and would like to participate! :D 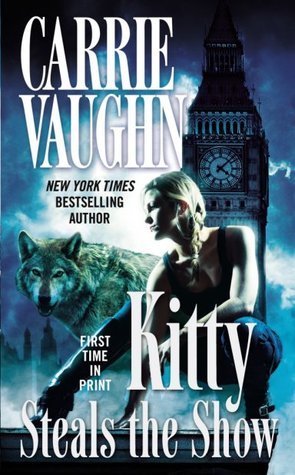 【They’ve tracked several young males for an hour. Careless, this one has drifted away from the others. Soon, he’ll be cut off, helpless. Its fellows will run, using its misfortune as their chance to escape. They won’t even look back.
The moment of attack happens quickly. Her mate leaps from shadows. He is sleek and tawny, full of muscle and life, his gold eyes shining in the light of the fat moon. The prey bolts, spinning on its haunches to escape. But three other wolves are there to block its path. The rest of the deer run, disappearing into the woods. This one is trapped.】

I haven’t been as active recently because of some family stuff that’s been going on, so I just wanted to let everyone who has tagged me in something know that I promise I will get around to it! It’ll just take me awhile…like it normally does… xD

At this moment, nothing. 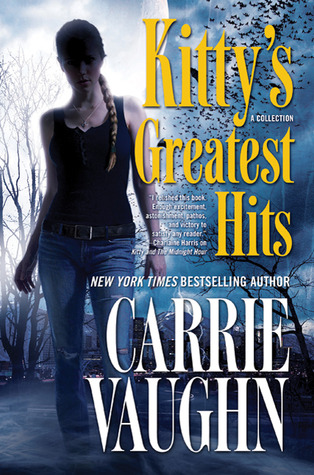 Kitty’s Greatest Hits by Carrie Vaughn, a book full of short stories that dealt with people and events that tie with the Kitty Norville series. I finished up this book this morning. Every story was a fun and interesting read. I definitely enjoyed the ones with Rick and Cormac in them the most, though… xD 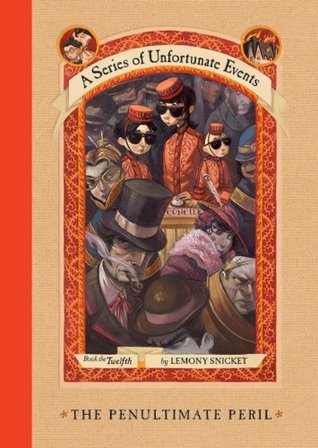 I still plan on reading the twelfth book in the A Series of Unfortunate Events series,The Penultimate Peril, by Lemony Snicket. I’m also going to start the tenth book in the Kitty Norville series, Kitty Steals the Show, by Carrie Vaughn. I only need to read five more books to reach my Goodreads goal of seventy. I’m hoping I’ll be able to get it done!

【“Your folks are going to kill you for coming outside,” Cormac said.
“I don’t care. They don’t know anything. Haven’t had an asthma attack in three years.”
They’d walked out of sight of the farmhouse when Ben said, “What’re we hunting?”
Cormac looked at him, wondering again how much he knew. Decided he didn’t care. If Ben didn’t know what was out there, he would by morning. “What killed my dad. Full moon’s when they come out.”】

At the moment I’m reading Kitty’s Greatest Hits by Carrie Vaughn. This book is a collection of short stories that tie together with the characters from the Kitty Norville series. Once I’m done, I’ll have five more books in the series until I’m finished. 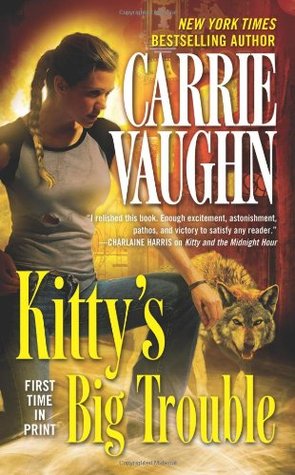 Last night I finished up reading Kitty’s Big Trouble by Carrie Vaughn, the ninth book in the Kitty Norville series. This one introduced some new characters, but I’m not sure if they’ll show up in the series again. I hope they do. Or at least one of them. I’ll just have to wait and find out!

I still plan on reading the twelfth book in the A Series of Unfortunate Events series, The Penultimate Peril, by Lemony Snicket. I’ll probably start it sometime in the near future. I’ll also be reading the tenth book in the Kitty Norville series, Kitty Steals the Show, by Carrie Vaughn.

I started Kitty’s Big Trouble by Carrie Vaughn, the ninth book in the Kitty Norville series, this morning and will continue reading it at work tonight.

【“Did you know Sherman?”
“As in General William T.?”
“Yeah.”
“I’m afraid not, though I’m sure he was fascinating.”
I must have looked deflated.
“It’s not like I knew every public figure who lived for the last five hundred years,” he said.
“But you knew Coronado. And Doc Holiday. That’s a pretty amazing roster right there. Five hundred years is a lot longer than most of us get. Do you know anyone who might have known Sherman?”
“Any vampires, you mean?”
“Anyone who might be able to tell me if Sherman was a werewolf.”】