Whoo, my first book review! Honestly most of my reviews will probably be of a series as a whole, instead of just one individual book (unless the book is not a part of a series, of course). That’s because I’m an extremely lazy person. But if the series is super long I’ll do one halfway through or if I really like one particular book in it then I’ll give that book its own review. It just depends on what mood I’m in.

Anyway, this review is on the Spook Squad series by Keri Arthur.
The series has three books total:
–    Memory Zero
–    Generation 18
–    Penumbra 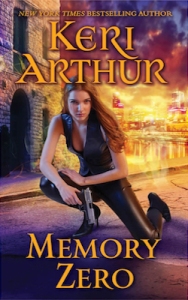 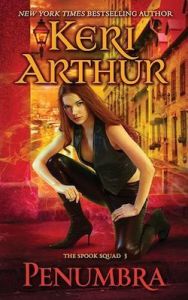 Because I’m not all that good at summarizing things, I’ll just post the summary for the first book, Memory Zero, given on Goodreads.

For Sam Ryan, life began at age fourteen. She has no memory of her parents or her childhood. In a decade of service with the State Police, Sam has exhausted the resources of the force searching for clues to her identity. But all mention of her family seems to have been deliberately wiped off the record. Everything changes the night Sam’s missing partner resurfaces as a vampire… and forces her to kill him in self-defense. Now Sam is charged with murder. Suspended from the force, and with no one left to trust, Sam accepts some unexpected help from Gabriel Stern, a shapeshifter who conceals startling secrets.

While investigating the circumstances surrounding her partner’s strange behavior, Sam discovers that Gabriel’s been involved with a dangerous organization that’s planning a war on the human race. More immediate, someone is guarding the truth about Sam’s past—someone who’d rather see her dead than risk her knowing too much. To stay alive, Sam must unravel the threads of her past—and find out not only who she is but what she is.

The first thing I want to say about this series is that it is unfinished. I did not find this out until after I read the first book so, being already invested, I read the next two anyway. I’m glad I did.

The entire story was fast-paced and action-filled, plus the overall plot was quite interesting and kept me wanting more. It is set in a more futuristic time, where there are self-driving cars, laser guns, and cloning is a common occurrence.

The POV switches between Samantha and Gabriel throughout the series. I usually enjoy that aspect in books, if the author does it well, because it allows you to know more than one character on a personal level, and it didn’t switch back and forth so much that it was confusing. Arthur pulled it off well.

Both Sam and Gabriel are stubborn workaholics who butt-heads throughout the entire series. They both act rather childish around each other at times, for being fairly serious characters, and you get to see how their relationship steadily grows. Although there is some level of attraction between the two, if you’re looking for a romance look elsewhere. This series is more action and supernatural than anything else.

Because this series is labeled unfinished, I wasn’t sure how satisfied I would be with the ending. I wasn’t actually all that disappointed. The final book answered most of the important questions brought up throughout the series but I honestly wished Arthur would have kept going so that I could see how certain events played out. Either way, it was an enjoyable read and I plan on reading more of Keri Arthur’s books.

Done! Hope that was an okay review. I’m still new at it so sorry if it wasn’t the best. But practice makes…better! xD